The foundations of the Mother Nature's Diet healthy lifestyle.

In today’s diet-obsessed world, carbohydrate (carbs) consumption has become one of the most over-discussed issues in modern day nutrition, and it is all-too-easy to get lost in the detail of the arguments. However, this page is not the place for that, so this is necessarily brief.

Mother Nature’s Diet is not a ‘strict low-carb diet’ as has become very popular in recent years. While there is no doubt that low-carb and ketogenic diets have proven to be extremely beneficial for some people, that is not what we are advocating here. Living the MND way, carbs are on the menu every day – vegetables and fruits are natural carbs. We eat vegetables at pretty much every meal, and fruits in moderation. Beware of health advice that is completely restrictive, such as “don’t eat carbs” as this is often a sign of nutrition advice that is restrictive, trying to apply ‘one size fits all’ mentality where it does not suit everyone.

In very broad general terms, there are five key reasons why we avoid eating grains and processed starchy carbs when living the Mother Nature’s Diet way.

This page does not allow us the space to explore each of these points in great detail, for that you might like to read Mother Nature’s Diet, so here we will just touch on these topics very briefly.

The 12 Core Principles of Mother Nature’s Diet are an attempt to give the best possible nutrition and lifestyle advice to the broadest possible group of people. In the world of nutrition, one size never fits all, so there will always be people who will disagree with Core Principle 1, but we believe this advice stands true for ‘most’ folks eating a typical Western diet. Athletes with specific training goals and individualised energy requirements would be the major exception.

We are not excluding an entire food group “from all people, in its entirety, at all times” just because ‘grains are bad for you’ as there is much more to it than that. The reality is that for many people, the popular foods made using grains and other starches, sold en masse in our supermarkets, which form a bulk part of the typical modern Western diet, are feeding people large amounts of easily-digestible calories, eaten rapidly in large quantities, eaten too quickly, too easily, too eagerly, too often, and these foods tend to be of a fairly low overall nutrient density. In all, this ‘consumption pattern’ seems to be a major contributing factor to growing obesity levels, it seems to be a major contributory factor to the rising type-2 diabetes problem, and it seems to be a major contributory factor to the sub-standard level of micro-nutrients in the modern Western diet.

Additionally, people tend to eat these grains and starchy carbs as ‘the bulk’ element of a meal (think cereals and toast for breakfast, sandwiches for lunch, pasta, rice and spaghetti for dinner) and this can often lead to over-eating large quantities of these foods. Because of this issue of quantity, these grains and starchy carbs tend to contribute a substantial proportion of the calories in a person’s diet, but comparatively little micro-nutrients (vitamins and minerals). This can contribute to weight gain. However, let’s not just blame starchy carbs and sugar for making people overweight, and don’t blame insulin either! If someone is overweight, they have been taking in more calories than they have been using – starchy carbs and refined sugar are just adding to the problems!

There is no harm in eating carbs, we just aim to eat the healthiest carbs we can. 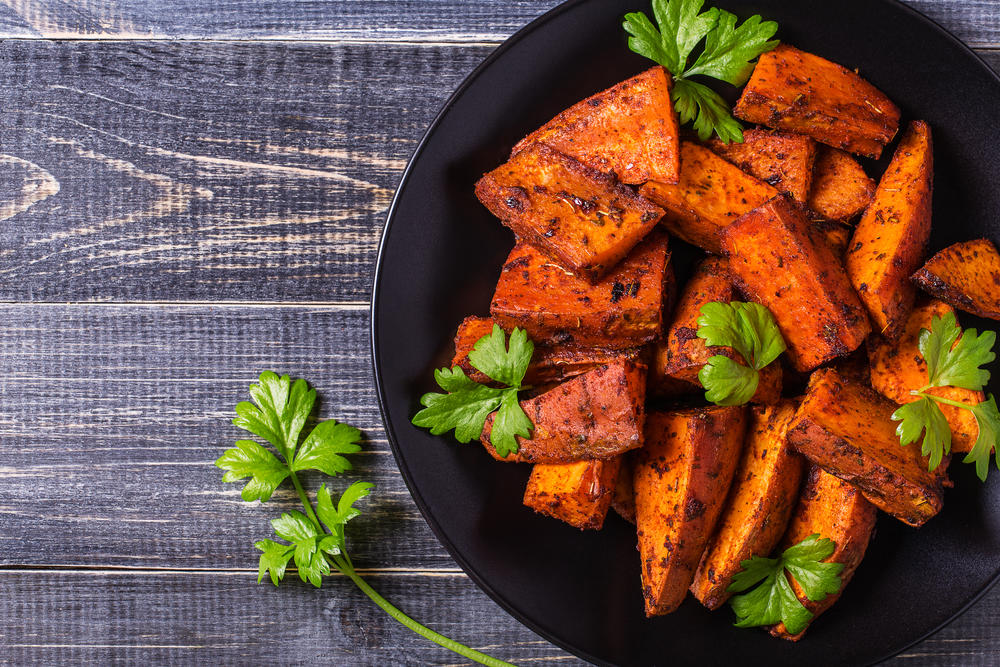 Additionally, too many processed starchy carbs can lead to a diminished insulin response, a damaged pancreas and can contribute to metabolic syndrome and type-2 diabetes. Bulky meals of starchy carbs can cause your pancreas to work too hard producing insulin and can trigger blood sugar highs and lows, leading to regular energy lows throughout your day. These energy lows can contribute to carbs being addictive, and subsequent over-eating.

We have not evolved to eat large quantities of grains, we cannot digest these plants in their raw form, that is why they have to be processed before we can consume them. There are compounds in grains – gluten, lectins, phytic acid and enzyme inhibitors – that are undesirable and have negative side-effects inside your body. These compounds can contribute to all manner of digestive disorders and auto-immune problems. A lot of people suffer from gluten sensitivity but they are not aware of it. If you suffer any digestive issues, bloating, gas, or inflammatory conditions (that could mean anything from skin conditions, to heart disease, from nasal congestion to arthritis) then it could possibly be that gluten is the cause, or a factor in aggravating the condition. If you suffer from any digestive health problems or inflammatory conditions, you may benefit from trying six months off grains to see if it makes a positive difference to your life.

If you are eating lots of starchy carbs, chances are you’re not packing in other more nutritious foods that your body could use to help you achieve supreme good health – such as lots of vegetables. Basically, and yes this is a generalisation, too many folks are living on cereal and/or toast for breakfast, bread for lunch, pasta and rice for dinner, and while none of these foods in small quantities will do you any terrible harm (unless you are extremely gluten sensitive), living on a diet high in these foods for many years, combined with a sedentary lifestyle, is a major driving force in the current rising prevalence of obesity, type-2 diabetes and a host of auto-immune conditions.

There are so many good reasons not to eat grains…and there are just so many better food choices available! If we look at the major health challenges our society faces today, rising obesity rates and rising type-2 diabetes rates are close to the top of the list. Meanwhile, too many people are eating too much processed food, high in sugar and low in micro-nutrients. What we need is less bulky ‘beige food’ that is high in calories but low in micro-nutrients. We need to eat less of that stuff, and more fresh whole foods, high in micro-nutrient values. Eliminating grains and starchy processed carbs from our diet and eating lots more fresh vegetables instead, is a sensible substitution, aimed at improving the nutrient density of your diet.

So MND Core Principle 1 recommends “Quit the grains and starchy carbs” as broad advice to the public as a whole – and that is very different from saying “never eat these foods, they are really bad for you”. So there are a bunch of exceptions to this ‘Rule’ – if you’re a bodybuilder  or weight lifter, you probably eat lots of carbs, and you probably know what you’re doing, so that’s cool, good for you. Maybe you run marathons and you love eating tons of carbs, and you burn it all off every week, well good for you, if you are gluten tolerant and that works for you then you keep doing that.

But whatever activity you do, you will likely benefit from making some better choices. Cereals, bread and pasta are low-nutrient carbohydrate options, and you could be getting your carbs from sweet potato, squash and parsnips, foods which will give you additional micro-nutrients, and foods that don’t come with added sugar, processed salt and other additives. Fresh whole foods are also less processed, and if you are making smart purchasing decisions, such as buying local and organic, you are supporting much more sustainable agricultural practices, with better consequences for the environment.

Anecdotally, many people trying to lose weight report that the single best thing they have done to quickly shift persistent undesirable body fat is to drop grains and starchy carbs. Unless you're an athlete, quit bread and pasta for three to six months and see the weight come off.

Buy the book, get started right away, today, and start feeling the benefits almost immediately, usually within a few days!